I have finally vanquished the various issues that have been preventing me from posting this since the 29th of October. *Deep breath* Okay! So, Reesa posted the following picture on Tuesday, October 25th, with a request for more information than the photographer provided. Art, music, writing, anything. It took a couple of days, but this is what came to mind… It’s based on my odd Brittany thing, and I’ve taken decided liberties with the northwestern coast of France. It’s also currently untitled. 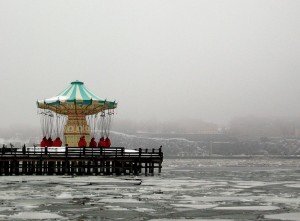 "It changes every year."

"The colors are nice, I suppose. Sometimes I just miss… simplicity. Waves and wind and water, with nothing else."

"There were plenty of other things. Shells and crabs and mussels, clams and seaweed and little fish."

"And there was you."

"And the birds. The birds found me first."

"So they did, but I think you count more than they did."

"How long has it been, since then?"

"Over two hundred. The tide comes in, the tide goes out, lambing-time comes, and lambing-time goes. At least there are still farms where we left them."

"More has changed than the land. Look."

Two figures walked down the pier, toward the shuttered ride. Brice adjusted his scarf, then pulled his hat further down over his ears.

"No, ‘Caël, it’s the wind," Brice said, hunching his shoulders up as another gust came off the water. "Your homespun is just fine."

Judicaël frowned at the sea-green and coast-blue wool that obscured all but Bryce’s eyes. "Are you—"

"Saints preserve me," Brice muttered, shaking his head. He grabbed the sleeve of Judicaël’s coat in one storm-grey mitten and hauled him around the gayly painted carousel. "You’re such a worrywart. I love everything you’ve ever made for me, ‘Caël. Especially—" He cut the slightly-muffled words off, wind-pink skin deepening to red as he blushed. Mitten tucked under his other arm, he tugged his scarf down, then reached over and pulled Judicaël’s own scarf out of the way.

"Brice," he said, his eyes closing as the other young man leaned in close. "I just…"

"I know." With that, he kissed Judicaël, his bare hand tucked under the lapel of his friend’s coat.

"See? Look at them! And out where anyone could see them."

"You kissed me out here. There were just as many people, too."

"There weren’t as many people living here, then. And besides, they’re not alone."

"It’s the wonder twins," Brice said, drawing back from the other young man just enough to get his mitten back on.

"There you are," said a girl in a bright pink ski jacket with a matching hat.

"Snogging again, no doubt," another young man in a puffy black jacket said. A bright orange-and-yellow striped hat with ear flaps and a pom-pom sat on his head.

"Probably," she said, and giggled as the two in question blushed and adjusted their scarves. "It’s not like it’s a secret or anything."

"Maybe it’s not a secret," Judicaël said, crossing his arms as well as he could. "That doesn’t mean that we want to show off."

"Just because you think it’s cute doesn’t mean other people wanna watch it," Earflap Hat said, curling his lip at Pinky, but his tone made it a joke.

"I wouldn’t mind showing off, just a little," Brice said, putting an arm around Judicaël before leaning over to plant a loud smack on his cheek. The effect was somewhat spoiled by two layers of fabric between them.  "’Caël’s too pretty to keep hidden."

"If you say so," Earflap Hat said, rolling his eyes and jerking his head toward the street. "Come on, it’s freezing. I’ll buy coffees if it means we can go inside."

"Valère is buying coffee! I think I can be persuaded to leave this compelling discussion for later," Pinky said, bouncing on her toes.

"As long as we can quit talking about whether I’m going to be put on public display," Judicaël said, with a put-upon sigh. "Please."

"Of course," Valère said, waving his hands, "there’s football to talk about. Much more interesting than your silly snogging." Holding his arms up, he turned away and started back up the pier. "Rumor has it that Filip Djordjević might be getting traded to Rennes! Can you imagine?"

"Oh, I’m sure that’s a very big deal," Pinky said, to his back. To Judicaël and Brice, she said, "I suppose you two would like me to get a head start?"

"Maybe just a small one," Brice said, his eyes crinkling at the corners.

"Catch up soon," she said, grinning at them. "I can only listen to Val’s wittering for so long!"

"We will," Judicaël said, waving at her. "See you, Jacinthe."

Jacinthe waved back and skipped away.

"I know you didn’t bring me out here to look at the view," Judicaël said, when she was halfway to catching up with Val.

"No," Brice said, taking a deep breath. He took his mitten off again, pulling his scarf down and pushing his hat up a little. "No, I wanted… Um. ‘Caël? Next term… Next term, there’ll be an empty room, and and and if you, maybe you’d want to…"

"Maybe I’d want to?" Judicaël squinted at Brice for a moment before his eyes went wide. "Are you asking—"

"Yes," Brice said, into the soft silence that followed. "If you’d like to, there’ll be room, so you can have your own space…"

Judicaël was utterly still for a heartbeat, two; he put his hands on either side of Brice’s face and held him in place for a long kiss.

"Did they just agree to live together?"

"And their friends know…"

"Well, probably not yet."

"That’s all right. It would have been nice, you know."

"What are you talking about? We lived together."

"It was… difficult. But I would do it all over again."

"Did you say something?" Brice looked around, turning as he thought he saw someone out of the corner of his eye. There was nothing remarkable, though, just the sea and the shore and the pier.

"Not out loud," Judicaël said, taking Brice’s hand and a step in the direction their friends had gone. "I don’t know if I still have all my toes."

"Like I said, you’re a worrywart," Brice said, following him with a smile. "I’ll warm them for you, later."

"Which is only fair, since you brought me out here in the first place."

A set of cold fingers laced through another, and if the light was right, half-formed shapes suggested a pair of young men dressed in the typical clothes of late 18th century farmers. They drifted after Brice and Judicaël, stopping at the end of the jetty to watch them round the corner before fading away, leaving behind a faint sense of satisfied peace.

A request for another story like my Hot Summer Days Story, though with “real boys” and a Happily Ever After, got me to thinking that I should really put up samples/excerpts of my stuff so that people can see what they’re likely to get. So, I’ll be doing that, soonishly.

In the meantime, the in-between time, here’s a completely random snippet of Ezekiel and Justinian, inspired by and using words from The Word Museum: Some Of The Most Unusual Words Ever Forgotten. This is all the context I have, other than “set some time after the first thing I wrote featuring them”, so it’s all I can give you.

Ezekiel raised his brows at Justinian’s state of undress. “Looking to go a-clicketing, my handsome dog-fox?”

“Dog-fox?” Justinian made a face at him, then lifted his chin in the direction of the window, through which an expanse of hayfield could be seen. “It is bunting time, isn’t it?”

He laughed, delightedly, closing the distance between them. “What happened to my easily-scandalized scribe?”

“You can still scandalize me,” Justinian said, sounding puzzled.

“But you’re the one suggesting we go out and make love in the grass,” Ezekiel said, slipping an arm around Justinian’s waist so he could pinch the younger man.

“I said no such thing.” Justinian did his best to sound both wounded and diginified, though he looked askance at the pinch. “I simply pointed out that it is the traditional time of year to go courting.”

“You’d rather be courted? Ah! I don’t know if I can remember how.” Ezekiel gave him a squeeze, only half joking. Justinian hadn’t needed courting, at least not that he could tell.

“Or at least asked politely if I’d like to go out for a stroll,” Justinian said, raising his brows and gently slipping away from the other man.

“Well, all right, I can manage that.” Ezekiel took a half-step back, dropped to one knee, and held his hands out. “Dearest Justinian, would you grace me with the honor of your presence whilst I stroll along the lanes and byways of the county?”

Justinian shook his head and took Ezekiel’s hands, pulling at him. “As if I’d refuse. Get up, will you?”