That’s the day that I Lift Up My Eyes To The Hills will be available for purchase. You can buy it from Dreamspinner, of course, or you can grab it from your favorite 3rd-party distributor.

Justinian Clark, new-minted journeyman scribe, has a lot of faith: faith in God goes without saying, faith in the orderly workings of the universe, faith in the administrative minutiae that ticks along in the background of his life. That minutiae has brought him to Saint Gabriel and All Angels Cathedral, where he is assigned to assist Brother Ezekiel Frost.

Ezekiel Frost, a ten-year veteran of The Eternal Brotherhood of the Guardians of the Church of Greater Anglia, is quite comfortable with his routine: helping the people of St. Gabriel’s parish, annoying the archdeacon, and not getting too used to his assistants. While he doubts that having a complete novice assigned to him will change this pattern in any way, he resolves to make the best of it.

Between exorcisms, murders, the attention of something, and an overly observant child, Justinian and Ezekiel have no time to settle into a comfortable routine. Nothing is as certain as they once believed, and they can only hope their faith will see them through. 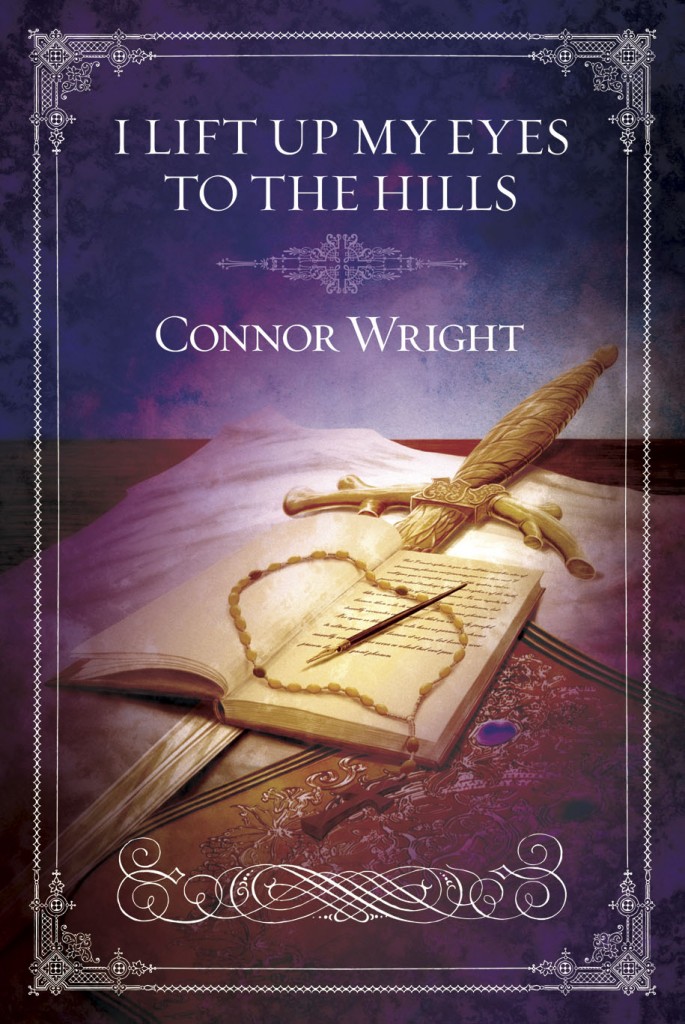 John Coulthart patiently took all of the bits and bobs I plucked out of the lint trap of my brain and turned them into this gorgeous cover.

I don’t have a release date, yet, but probably in time for the holiday season.

News first, because I’m going to pop otherwise: Ezekiel and Justinian have a home! I SIGNED THE CONTRACT TODAY! I Will Lift Up My Eyes To The Hills will be published by Dreamspinner in October/November! As soon as I have an actual date I’ll post it; in the mean time in-between time I’ll just be mooning about and trying to figure out what I want the cover to look like. (I already know who I want to illustrate the cover, if she’s still available. *Crosses fingers and toes*)

News second: I’ll have a post over at Scorching Reviews on Sunday, April 13th, as part of their LGBT month. Now all I have to do is figure out WHAT it is I’ll be posting. It’ll likely be Ezekiel/Justinian related, but beyond that, I don’t know what it’ll be.

Updates: Windows 8 and I are getting along much better, now. I updated to 8.1, which doesn’t seem to have made a huge difference (but I also doubt I’d used 8.0 long enough to notice any differences outside of the addition of the “start button” on the taskbar). I’m getting used to going to settings to turn off/reboot, even though it still makes no friggin’ sense whatsoever.

I discovered that I had entirely too many security-oriented programs running at once, which was causing all sorts of connecting-to-the-internet issues. I uninstalled two of them, made sure the third was off, and reinstalled one of them. Now my computer doesn’t complain about being not being protected and I can actually use the internet!

Details when I can share, but for now? Just know I am ridiculously pleased.

So far, I can say that I'm NEVER getting tired of those magic words: "We'd like to offer you a contract…"

That plus getting some very welcome financial news equals one of the best Tuesdays I've had in about three months.

which is, y’know, not always bad. Just a couple of quick cellphone pictures of a couple little books that were delivered yesterday… SKATER BOYS.

There it is, the book!

Most of the time, text messages don’t make me smile. That one, however… I’m still grinning. Unfortunately, I’m not able to go pick it up until tomorrow, but tomorrow, I will go get it. (ANd then there will be pictures!)

It’s from Cleis Press, which means that it’s my copy of Skaters. And as it’s August, that means that Skaters is available for sale — if you’re so inclined, you can pick up a copy right here. There’s something in it for everyone, I think.

It’s almost silly how pleased I am about this.

My ridiculously sweet and slang-laden Totally Choice will be available for purchase from Cleis Press in August! And while I’m biased toward my own story, I can say that based on the ARC most of the other stories are worth picking up, too. And, of course, the stories I didn’t care for may be your cuppa — everyone likes different stuff, after all.

I should have my own copy in hand sometime soon, which of course will result in at least one picture. I am over the moon, I tell you.