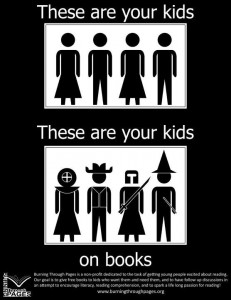 About two weeks ago, I sought out a blog I had seen mentioned in passing somewhere else. On this blog was a post that stated that getting kids to read was basically a useless goal and besides basically everything published for kids/young adults was shit so it wasn’t any big loss.

I chose to stay out of the comment section, for various reasons, but the post got lodged sideways in my brain. I’d think about the idea that getting kids to read was stupid/pointless/only made straight white people rich for writing about straight white people and get cranky, then something would distract me and I’d forget about it again.

Then Michelle reposted the graphic above and I knew I couldn’t keep this to myself any longer.

I can’t remember the first book that really grabbed me and wouldn’t let go, though I think it might have been Black Beauty — my paternal grandmother sent me a copy of the Illustrated Classics version when I was…Ten? Maybe? I remember that I read it three or four times over the course of a couple of years.

Later, when I was a teenager, I stumbled across Anne McCaffrey’s Pern books and, in ninth grade, I wrote my first fanfiction. (And when I read it for the class, I was suddenly very aware that even in a school FULL of weird kids*, that was considered particularly weird. Didn’t stop me, though, and later I wrote more fanfic based on Clive Cussler books. More on that later, though; I’m getting side tracked.) (In retrospect, I thiiiiiink Anne McCaffrey’s Pern books were the first books I ever read with characters in a same-sex relationship. Huh.)

I sank into every book I read, escaping into worlds where the odd, the left-out, the abandoned and the ostracized were often the hero. Jakkin and his dragon, for instance, from Jane Yolen’s Dragon’s Blood. Jakkin is essentially a slave; the dragon is A) stolen and B) turns out to have an interesting “defect” that would have meant death for him if he hadn’t been stolen.

The Redwall Books were another set that captured my imagination, for a while. I lived and breathed Dirk Pitt’s adventures, too, as I mentioned. As I got older, I branched out and discovered all kinds of other things — I read pretty much all of Rubyfruit Jungle in the library when I was eighteen, half-terrified my mother would catch me and ask me what I was reading because I had no idea how to explain it to her.

I don’t remember how I discovered A Queer Kind Of Love, which was mostly a murder mystery featuring a gay detective and his crabby detective partner. Looking back, that may have been the book to cement (or possibly spark) my appreciation for grouchy guys with a decidedly different interior… As well as my love for epilogues that make me (and, I hope, others) grin and make strange happy sounds.

For a while, I could walk down pretty much any of the shelves at the library and run my fingers along the spines; when I stopped, the likelihood that one or both of the protagonists would be gay was really high. The Man Without A Face; The Salt Point and The Sea Of Tranquility; a book whose title and author escape me but it was about a young man (~16) figuring out that he was gay — it was set in Australia, featured dirt bikes, a lad mag, a crush on his older brother’s friend Peter the confession of which was awkward and horrible and beautiful all at the same time… All of them I found by accident and they showed me that people didn’t just argue about whether gay people were, you know, people, they wrote books where they were…people.

Then there was discovering that I really couldn’t read Datlow and Windling’s Year’s Best Horror compilations, because they freaked me out too much; an anthology of pulp stories that I checked out a couple of times because there was one story in it–the only one I remember outside of a snippet from another one–that exposed me to the idea that gender wasn’t a set-in-stone 1/0 binary (and no, I cannot remember the name of the story, the anthology, or the author/editor, ARGH). There was the day I discovered a copy of To Kill A Mockingbird abandoned in a wooded area, followed by the discovery of just why it is a classic. I discovered that other classics aren’t really all that great, if you ask me — Of Mice And Men, bah.

In the last two years of high school, I was introduced to Langston Hughes, Lawrence Ferlinghetti, and a poet who wrote two poems I’ve been looking for ever since (one about falling through thin ice and one about painting a ship). Naomi Wolf’s Writing Down The Bones went everywhere with me for about six months as I read about How To Write/Be A Writer. I kept writing, too — but I branched out into original stories and poetry, only one of those two categories producing anything worth revisiting all these years later. (Hint: NOT POETRY. One benefit of that, however, is that I got THAT phase of my writing life over with early, and am now capable of writing poetry that people might want to read on purpose. Heh.)

Then came the internet and Reesa, who introduced me to fanfiction in general and slash in particular, followed by Lois McMaster Bujold and Diana Wynne Jones, among others. I can’t even begin to list who I discovered via the net, but it’s more than three.

My entire house is full of books. The garage, in this case, is literally FILLED with books — all in boxes, taking up precious room where the car should have been this winter. And in those boxes you will find just about one of everything. From where I am currently located, in my room, I can put out a hand and pick up A Field Guide To Pacific States Flowers, a cookbook illustrated by a local artist, and a paperback from the mystery/suspense/SF category. On the table at the foot of my bed is a stack of books that contains:
– Wicked Gentlemen (M/M fantasy/paranormal; it’s a good book, too. It makes me want to write fanfic, which I haven’t wanted to do in years.)
– Like Magnets, We Attract (M/M anthology featuring Shea Meiers’s Mauka/Makai)
– No Regrets And Other True Cases, Ann Rule’s Crime Files Volume 11 (true crime, surprise)
– Learn Latin: A Lively Introduction To Reading The Language
– The Ghost Wore Yellow Socks (M/M mystery/suspense)
– Pursuit In The French Alps (This is probably best categorized as the kind of boy’s adventure story that Tobias would read. It was originally written in French, then translated; the copyright dates are from 1960 to 1963.)
– Dorothy Sayers’ Strong Poison (One of my favorite mysteries. The PBS Mystery version is really good, too — the casting director did an incredible job of finding just the right actors.)
– Fraz ak Mo ki Itil Angle-Kreyol Ayisyen/English-Hatian Creole Phrasebook with Useful Wordlist [for Kreyole speakers] (I love the languages section at library book sales. I always try to get something new, especially if it’s A) Welsh or other Bryonic languages or B) related to a story.)
– Writing In General And The Short Story In Particular
– Wise Sayings From The Orient (it was published in 1963, and aside from the horrible title, it is a nice little book of aphorisms and proverbs)
– and last but not least Ecce Romani 1: Meeting The Family (I wish I could find the rest of the series)

I could list all the books on my bookcases, but that would take too much time and I’m distracted again anyway. If I had never been read to, if I had never been encouraged to read, if no one had ever said ‘here, try this, you might like it’; if reading hadn’t been important to anyone else outside of whatever was required by school, I wouldn’t be writing this today. I wouldn’t be writing, period.

Kids absolutely should be encouraged to read. If they want to read crap at first, or if they only want to read what’s popular at first, great. At least they’re starting somewhere. Keep throwing suggestions at them until they stick. Encourage kids to look beyond the VAMPIRE!! aisle, give them Raptor Red and Dragon’s Blood and The Spirit Ring. Nalo Hopkinson’s The Robber Queen might be a little old for some of them, as might The Sharing Knife series.

If there’s a dearth of what you think kids “should” read, then shut the fuck up, sit the fuck down, and fucking write it. All the energy you waste shouting at other people about how horrible they are for not writing X would be better spent in, you know, writing X.

Some of those books I listed above, like The Salt Point and Sea Of Tranquility? Also introduced me to Misery Lit. It didn’t take too many rounds with Misery Lit before I decided that fuck that noise, I don’t need to expose myself to it any more… And when I decided, some fifteen to twenty years later, that I was gonna do this writing thing? My first writerly vow was NO MISERY LIT. There are a lot of M/M authors for whom that is a guiding principle, stemming from the same source: the only basically-mainstream stories they could find when they were growing up with GLBT main characters all ended with either death or unhappiness or both.

To move forward, beyond where we are now as humanity, we need kids who read a LOT. We need kids whose imaginations get stretched, whose perspectives get shifted, whose horizons are ever-expanding because they know there’s more out there than where they are now. If kids don’t read, if we don’t start with “at least they’re reading…” and go on to “…and when they’re done with that, here’s a whole stack of other things!”, we all lose.

And that is why getting kids to read something, anything, is a worthy goal.

* I went to a teeny little private school for dyslexic** kids for most of my academic career. Tiny, in this case, meaning the entirety of 9-12 graders totaled something like 30 kids. If that.

** Yes, I’m dyslexic. My particular issues manifest themselves in the math realm, which is why I’m a writer.