I know, I know, how many works-in-progress can one person have, anyway?

Since I got my Goodreads Author status, that means that I can finally participate in the M/M Romance Group‘s Hot July Days challenge: the members pick a picture, the write a letter asking for someone to write a story about said picture. They’re allowed to be as particular or as vague as they like — it’s rather like Anonymous Lovefest, except about random strangers instead of bandom.

A new member decided that her first post would be to the challenge, and her letter included this picture (as far as I can tell, this may be as big as it gets): 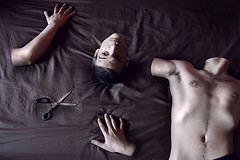 Why does he have two right hands?

The longer I looked at her letter, and the further I read through the comment thread, the more interested I was. So I said what the heck, I’ll do it. If nothing else, it’s good for exposure. I also did a few stories for Anonymous Lovefest and really liked it, so.