So I’ve been thinking about the three sub calls I’ve got rattling around in my head. One of them is due in August; two of them in September. I have one thing that’s almost done (Max & Trev); one thing that’s kind-of started (sailors); and one thing that’s still in the flaily-maybe stage (Home For Christmas call).

And now I’m poking at the sailors thing and thinking about doing a riff on The Little Mermaid. Thing is, I’m kind of worried that someone else/many people will think of the same thing. I like what I’ve got on the call so far, but I’m not sure that I can fulfill Mr. P’s requirements (anything, as long as it’s sexy) without making it seem like Character A is saying “I know you’re sad and all, Character B, but let’s fuck like crazed bunnies!”

I know I could turn it around so that all of the emotional stuff comes after the sex, but I don’t know that I want to do that. I know I need to make up my mind sooner rather than later, since I’ll run out of time, otherwise… Argh! Maybe I’ll just go back to working on my strange dragon thing.

Remember that one of the subgenres that you write in often has capitalization quirks. Running a search-and-replace on the commonly-capitalized word(s) before submitting your story will make your future editor(s)–and by extension, you–much, much happier.

Also, remember that just because you think something is clear as the contents of your average bottle of Gerolsteiner doesn’t mean someone else won’t find it clear as mud. (Or: your writing: clear it ain’t. Watch your turns of phrase for opacity.)

Also also, writing Arthur Knox apparently affects the rest of your life, given the above. Oops.

As I was looking at my Giant List O’ Names, I started wondering how many characters had names that started with the same letter. I also wondered how many characters shared the same job, because I knew I had more than one member of the military, more than two hockey players, and more than a few students. So, I opened up Excel and started pummeling data into submission. The result? If you’re one of my characters, you are most likely to be a student with a name that starts with S. I have proof: 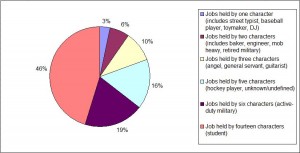 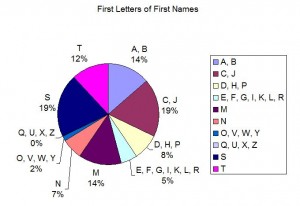 I never thought I'd name a character Arthur, but I have. It fits him.

You can click on them to make them bigger.

A week or so ago I got up, forced one of my two favorite hats onto my head, and ran a couple of errands. Then I had some time to kill, so I pulled over to read — but my head got hot, so I took my hat off. Much like mushrooms in a fairy ring, my hair sprang up more or less instantly, resulting in this: 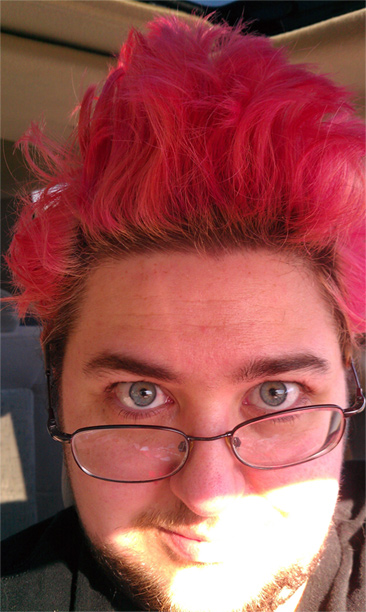 It's hard to take a picture of yourself with a phone that doesn't have a physical shutter button.

The other day, a lady asked me “How do you get your hair to do that?”; I asked her (mostly teasing) if she meant standing up all over and told her it did it by itself (because it does). She actually meant what dye did I use, so I told her. (Splat! brand, available at Walgreens and other places. They have pink, red, purple, blue, green, and bright yellow.)

Well, currently, the hard part is the cover-art spec sheet for First Flight. It’s a fun hard, though — the part that’s going to take the longest is getting over to the piece of public art I need pictures of and taking them. I need a bunch of them, in different light, and I wonder if my brother’s tripod will fit/work with the camera… And now I’m thinking maybe I’ll borrow mom/my brother’s OM1 and take some actual film pictures.

Other hard things I’ve done, recently, include actually telling my family about my writing career — I survived, and the response on the whole was positive, so hooray — and writing the climactic fight between Good and Evil for my weird Anglicans thing. It took me 12 hours to get four pages, striking a balance between good, evil, action, and dialogue.

I definitely need to do some rewriting on it, though, as the evil is rather ill-defined, and that’s a weak point. There’s no clear why, although I could argue that it’s simply more true-to-life than it might be otherwise.

(Apologies if you now have that song stuck in your head. I’m muddling my way through Half-Life 2, and every time someone mentions Black Mesa, I hear GlaDOS in my head.)

Anyway! Successes abound, at the moment. I have, as of this moment, A) gotten myself a ticket to go see MCR this fall, with parking and everything; and B) FINISHED my Hot July Days story. I have to let it sit for a couple of days, now, and then go back and make sure that everything’s spelled right and formatted correctly, but that’s the easy part.

I’m still happy over that whole ‘sold another story’ thing, too, but that’s not new.

I fed some of my stories to Google Translate, copying and pasting and translating through at least three languages. Cut because it gets a little long.

END_OF_DOCUMENT_TOKEN_TO_BE_REPLACED

This applies to two different things that I’m trying to write. The first is the Hot July Days story; the second is a review of The Slipstream Con.

Seriously, I love TSC to pieces and I can’t articulate WHY? At least not in the context of an Amazon review, apparently. Tal and Vanya’s honor! Kellen’s funny (and a jerk, but mostly wonderful)! The whole plot-that-goes-places thing! Heston! The painting and other art! The ending! The ship’s name! (The fact that it could be the ‘ship’s name!)

Part of my problem is that elaborating on why I love those things generally means I’ll be spoiling the book for everyone, and I reeeeeally don’t want that. The other part of it is that I’m really inclined to just post “Seriously, I want MORE AWESOME STORY. Buy this and you can help make that happen. Plus you get MAS, too, so really it’s a win/win all the way around.” Needless to say, that’s not going to get rated “helpful” by anyone outside of the authors. *Grin*

I have also learned two things, in the course of trying to write this review and one for The Balance of Silence:

1) I do not understand why people recap the plot that’s in the blurb. I don’t know about anyone else, but I read the blurb to find out what’s going on (if at all possible; some blurbs aren’t helpful in that regard) and if I want to read the story. Recapping what I’ve already read annoys me — I want NEW information, not something I can scroll up and re-read on my own.

2) I don’t really get/like the whole alpha/beta/omega/waffle/protozoan thing. Those are great designations for cultures/groups of creatures with a rigid social hierarchy, but on an individual level, humanity tends to be more fluid. I don’t care if Tal’s an “alpha male”–in fact, I’d argue that the term has been so corrupted by romance writers and readers using it as shorthand for “asshole” that it doesn’t apply at all. There’s no way Vanya is anyone’s beta ANYthing. Well, okay, maybe to the Empire/Empress. When it comes to working with–and being married to–Tal, she’s every bit his equal.

Ugh. It doesn’t help that I didn’t sleep well, either.

I was just skimming over the copy of First Flight* that I started to keep track of my pre-editing edits and came across a note to myself that I’d forgotten writing. The context is as follows: Kevin is trying to worm his way back into Jesse’s good graces by being friendly with Christopher. Kevin, in an attempt to bond with poor Chris, is trying to get him to go somewhere, and offers several options. One of them is a strip club; specifically one with topless female waitstaff.

Yeah, read that again. My note says: This is a weird question, considering that the three guys involved in the relationship are all, y’know, GAY AS DAD’S OLD HATBAND. So I should probably do something about that.

On a related note (heh), I have no idea where I picked up the phrase ‘gay as dad’s old hatband’. I think it may have predated my internet years, so maybe a library book?

* No. Still not tired of that whole “I sold a story!” thing.

The Bad News: My latest (and, naturally, soonest-due) story is trudging along. I’ve got a whopping 550 words, and that’s after restarting it twice. I think I’ll get some work done on it, soon, though.

The Neutral News:
– The Scribe Thing has something like a plot! And a LOT more action than most of my stuff has. It is also, apparently, supposed to end where it ends — it has the potential for more adventures, so that’s nice. (And I’ve been having Ideas, so I’ve been writing them down…)

– I’m dithering over giving up on the NOLA trip and going to see one of my favorite bands in concert instead. I may, possibly be able to do both, but I need to check dates with someone else before I make any commitments.

The Awesome News: Dreamspinner offered me a contract for First Flight, so I of course said YES. The signed contract is lying in a mailbox, awaiting collection and transportation to its destination. Chris and Jesse’s story — First Flight — is one that I really love, so the fact that DSP said ‘we’ll take it!’ just makes me feel all warm and fuzzy inside.